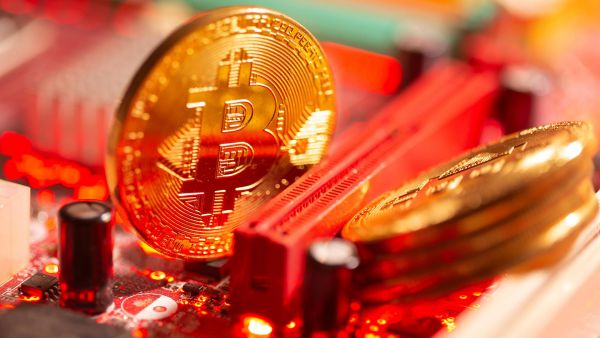 Bitcoin at the auction on January 21 fell by 17%, being below the $ 30 thousand mark. Although the volatility of the cryptocurrency has become commonplace, this decline was the strongest since March last year. While it is difficult to say whether Bitcoin has reached a long-term ceiling, analysts believe that over time, it will inevitably lose its status as a safe haven, protecting from market shocks.

The growth of bitcoin last year was impressive: starting at less than $ 9 thousand, the most popular cryptocurrency rose to $ 30 thousand, and after the New Year it crossed the 40 thousand mark. The main reason for this renaissance was cited as the desire of investors (often small ones) to protect and increase savings in the face of an unprecedented inclusion of the printing press in the United States and in many other countries. Easy and “free” money rushed both to the stock market (as can be seen from the regular records of most stock indices) and to the cryptocurrency market.

Golden days ahead: bitcoin threatens to replace precious metals
However, gold as a means of "defensive" investment is not going anywhere in the foreseeable future.
Last week, growth gave way to a fall, and by Thursday there was a collapse altogether, when bitcoin sank below the 30,000 mark. This fall was the worst in the past nine months. Quite a strong downturn affected almost all cryptocurrencies, including Ethereum, which previously almost tripled. Later there was a rebound, but bitcoin was able to fix only at the level of $ 32-33 thousand, which is very far from historical highs. In general, the correction in the rapidly growing market took down more than $ 200 billion of capitalization at once.

Biden was not happy
What happened? First, the BitMEX report admits that there may be a vulnerability in the bitcoin blockchain that could lead to "double spending." In such a situation, there is no need to talk about the reliability of this virtual currency, and market players reacted immediately. Subsequently, experts suggested that we are talking about a false alarm caused by the simultaneous "extraction" of two blocks at once, and, accordingly, about the reorganization of the chain. It looked like double spending, but it wasn't. Despite the refutation, a certain "sediment" remained.

Photo: Global Look Press / Marius Becker / dpa
Secondly, Janet Yellen, a candidate for the post of Finance Minister of the country, presented by the now full-fledged US President Joe Biden, made a very controversial statement in which she expressed concern about the existence of virtual currencies. According to her, they are used primarily for "illegal financial transactions." Accordingly, you need to think about how to limit their movement. This is not what the crypto enthusiasts expected from the new composition of the American administration.

Investment and subtraction: which investments became the most profitable in 2020
Bitcoin and gold turned out to be the leaders in profitability, ruble deposits brought modest income
It is worth noting that proposals to combat money laundering using cryptocurrencies were prepared by the Trump administration, and now the White House will have to decide what to do with them. Judging by Yellen's comments, the situation for the cryptocurrency market may be alarming, and traders take this into account in their estimates of the future of Bitcoin.

According to the head of the data analysis department of CEX.IO Broker Yuri Mazur, the main reason for the fall in the market value of bitcoin is the corrective phase of the market dynamics of this cryptocurrency, which began with a big fall on January 10-11, 2021:

- Its start was a breakdown of support around $ 40.3 thousand on January 10. What we are seeing now is its continuation. Nevertheless, on the CEX.IO exchange, we still see a significant concentration of buy orders in the region of 31 thousand. They characterize this price as a solid support on the bitcoin price chart. In the medium term, we also expect to see fluctuations in the BTC / USD quotes in the range of 28-36 thousand before determining the further direction of movement.

Valuable Reaction: How Markets and Bitcoin Reacted to US Events
Since the beginning of 2021, the Moscow Exchange index has updated its historical maximum, and the bitcoin rate has broken through $ 41 thousand.
Investors' sentiments meanwhile show that the cryptocurrency market is already "overbought", and the quotes are not entirely adequate. According to a survey by Deutsche Bank, more than half of the 627 market players, when asked to rate the probability of a bubble on a scale of 1 to 10 (where the more, the higher the danger), gave the top ten. According to traders, bitcoin is more likely to become twice as expensive in a year than to rise in price. Of course, the opinion about the bubble is not only about cryptocurrencies, but almost the entire stock market, especially companies like Tesla.

Flimsy protection
As for the function of bitcoin as an asset - a "safe haven" that protects against inflation and financial bubbles,

- the analysts of JP Morgan bank in the latest review have questioned this statement. Banking holding strategists John Normand and Federico Manicardi compared the main cryptocurrency with previous assets, which rose in price at a record pace in the past. These included gold in the 1970s, the Japanese Nikkei in the 1980s, dot-coms in the 1990s, commodities and the Chinese stock market in the 2000s, and, finally, the shares of the largest Internet companies (Google, Apple, etc. .) in the 2010s. Each of them has shown tremendous growth and received unique epithets from enthusiasts (from "Japanese economic miracle" in the case of the Nikkei to "endless growth" in relation to the Internet majors).

Photo: Global Look Press / Du Xiaoyi / XinHua
Analysts concluded that all these investment targets eventually began to rise and fall with the market after the initial spurt, turning from a way to hedge investment risks into regular cyclical assets. In their opinion, the same fate awaits Bitcoin, which will become the first victim in the event of market turmoil. However, JP Morgan employees admitted that cryptocurrencies may be suitable for investors who are disappointed or frightened by the devaluation of traditional fiat currencies, which are now showing signs.

Crypto for an increase: the volume of transactions with digital currency in the Russian Federation has tripled
In 2021, under the most optimistic scenario, experts predict an increase in the bitcoin rate to $ 90 thousand
"You can lose everything"
Some argue that bitcoin can do worse in the longer term than even the most heavily inflated traditional stock market. So, the analyst of the Finam Group of Companies Alexey Korenev complained about the colossal volatility of bitcoin, explaining it by the fact that the cryptocurrency is not backed by anything at all:

- It flies back and forth, from $ 9 thousand to $ 40 thousand, then falls below 30 thousand. There are no significant factors for Bitcoin to fluctuate so much. This is an exclusively speculative movement that in no way depends on the situation in the world and national economies. The price is driven by investors who have this opportunity, because they own a large share in bitcoin.

According to Izvestia's interlocutor, investing in bitcoin is now too risky to be considered seriously. Only a very small part of the portfolio can be allocated for these purposes, provided the investor has extra money.

Not a pyramid anymore: why bitcoin has regained its popularity
Cryptocurrencies are rapidly regaining their lost positions due to the interest of large financial players, states and the loss of confidence in the dollar
- You can earn a lot (if, as promised, bitcoin rises in price to $ 150 thousand or more), but you can lose everything if the currency collapses to zero. When cryptocurrencies are secured with something and the corresponding legislation is created for them, it will be possible to talk about this seriously.

In the meantime, the main losers from the rise of cryptocurrencies at the beginning of the year are computer game lovers. The rise in prices (primarily for Ethereum) has led to a frenzied demand for powerful video cards, with which the mining process is supported. As a result, assembling a new gaming computer for yourself became an unrealistic task: prices for modern cards like the Nvidia GeForce 30-series have jumped at times, and in many countries, including Russia, they simply disappeared from sale, since resellers or even miners themselves buy them directly from suppliers in bulk. Perhaps lower prices in the markets will lead to some relief, at least for PC gamers.